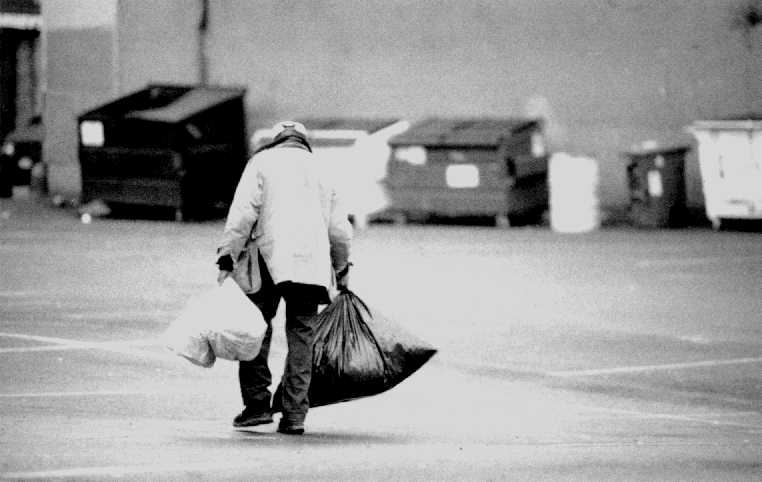 Roy was a sweet guy – bright, articulate, with middle-class expectations and outlook. But he was homeless – and a hoarder.
In the world of Nightwatch, you have to pack everything with you wherever you go. The shelters are just overnight flops. Our Dispatch Center, where people are fed and sent to shelters is way too full of people to take care of stuff.

Roy had rigged up 3-4 bags which he slung across his shoulders. Duffle bags, various shapes and sizes of athletic bags. These hung like giant bumpers all around him, hanging off both shoulders. I have no idea what he kept in those bags. Something he felt was critical to his survival. Or important to his mental well-being.

Through the months Roy came to NW it seemed as though the bags were growing – in number and size. Maybe I was imagining it. Maybe he was always burdened by those five bags when he came to NW. But the problem those bags created certainly did grow.

First, a person with five or six bags took up a lot of room in a crowded space. He would back his chair up from the table and carefully sit with his bags still arrayed around him.

Next, because he was so bag-heavy, so wide from bags that he was scratching up the woodwork when he came in and out of the 40-inch wide front door of Nightwatch. This made the staff feel testy. They became ill-disposed toward Roy and those seven bags.

And of course, the other homeless guys were really miffed when he bumped into them with his massive bags. “Why you need 10 bags, man? You gotta stow that s— somewhere – you keep bumping me.”

Finally, one day there was some sort of impasse. Roy and his ever expanding collection of bags just disappeared, never to be seen at Nightwatch again.

Today, I was thinking about Roy and those bags, and I realized, this will happen to us all, at some point. We will be gone. All our bags of stuff – so critical, so necessary, so burdensome – will go to other people, other places, and recycled.

I think about Roy, his load of 10 bags (or was it 12?), never enough, always needed. I think about all the trouble his stuff caused him and the people around him. And I realize that Roy was only a little crazier than the rest of us who are so devoted to all our junk.